Our coaches grew up playing with us!

We have 12 paid teenage coaches who all currently play on Coach Nick’s U18 Team!

Enjoy the “Before” and “After” pictures!

To God be the glory for something so cool! 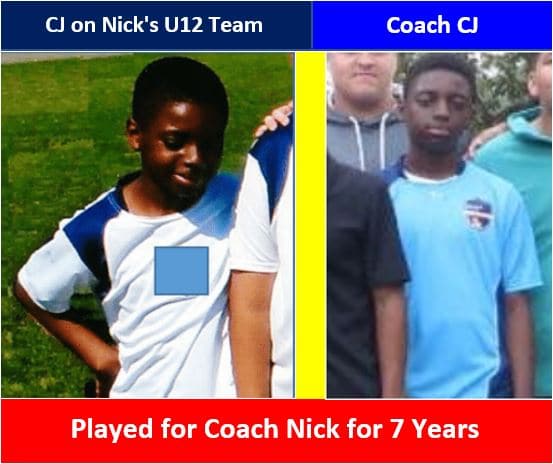 CJ is an Assistant Coach for the U12 team with Coach Diego and Coach Keanu.

CJ has played for Coach Nick since 2014 and has never missed a season since!

Cool Moment: CJ was 9 when he played on Nick’s U12 team.  He was 10 when he moved up to U14. He was always younger for the age group he played.  When he moved upto U18, his size started catching up to his talent.  He became a threat up top.  In his first game as U18, he scored a beautiful goal against Calvary after winning the ball in the air.  We won the game 7 – 1 before Nick gave the order for the boys to stop scoring.  If you’d like to see the goal, we actually have it on video here.

CJ is now 16 and a rising Sophmore at Cuthbertson High School in Weddington. 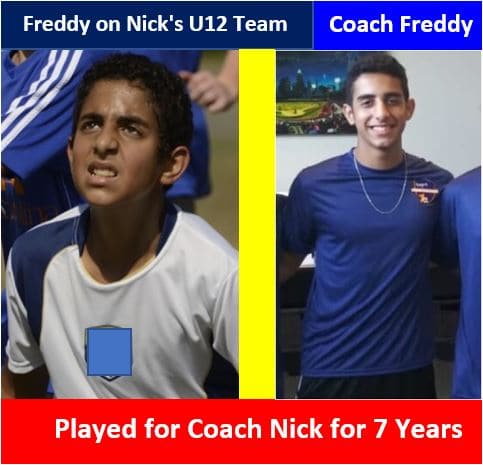 Freddy is the Assistant Coach to Coach Graham for the Boys U14 team.

Cool Moment: Freddy is a talented forward who has scored many goals on Nick’s U12, U14 and U18 teams! It is difficult to pin-point just one moment.  So, to play the odds, we’ll highlight a defensive play for Freddy.  In an intense U14 game which we won 3 – 2, Coach Nick put Freddy on defense after he scored to put us up.  His position on the field was not a position, but rather to mark out the other team’s best player.  Freddy stuck to him like glue and neutralized him even though he would rather have been scoring goals up top. Way to be a team player!

Freddy is now 17 and a rising Senior at Ardrey Kell.  He has played for Ardrey Kell’s soccer team as well as several club teams around Charlotte. 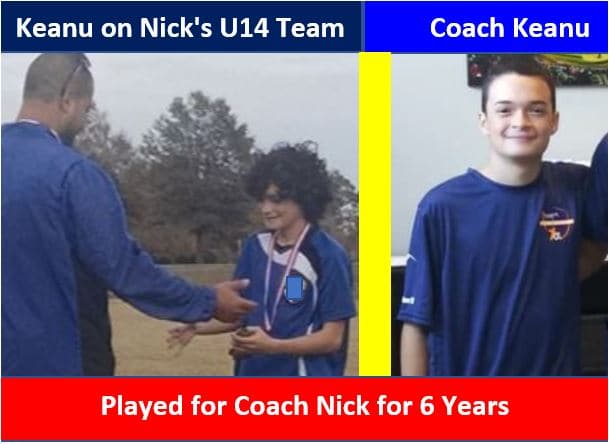 Keanu coaches the U12 team with Coach Diego.

When Keanu was 12, he played on Nick’s U14 team in 2015. Since then, Keanu has never taken a season off from playing for Nick.

Cool Moment: In the U14 Premier Tourney, after upsetting the “favorites” undefeated #1 Seed, Mint Hill, 4 – 2, we found ourselves down to WOM, who were nowhere near as good.  Keanu intercepts a cross in the box, a one time volley, that ends up in the upper 90s to put us back in the game.  (We tied the game, advanced, and won the Championship that year)

He played for his Middle School team at Quail Hollow. Keanu is currently the team captain on Nick’s U18 team.

Keanu is is now 16 and a rising Junior at South Meck. 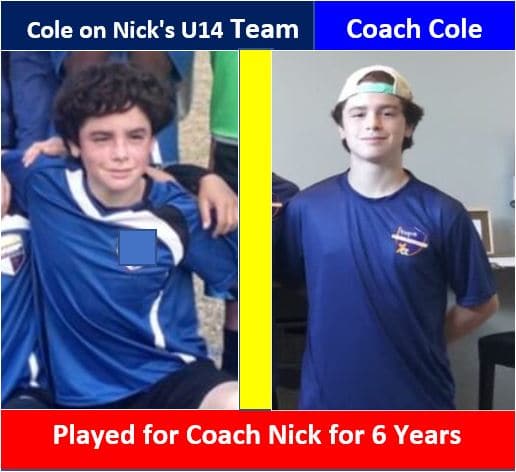 Cole coaches one of Hope Soccer’s U10 teams along with Coach Mason.

Cool Moment: Building from the back, Coach Nick likes to stack the defense.  Cole is a very talented player who is very tough on defense.  In the final of the U14 Premier Tourney, which we won 1 – 0 after having an undefeated season, Cole inspired the back line to greater things! We shut out a team that was used to winning games by a large margin.  As left back, he was on side of their best player.  Every time Cole stripped him of the ball, he’d usually dribble around him just to show off a little bit. Made the crowd go wild!  Yes, our parents get into it sometimes, our games are exciting!

In middle school, he played for JM Robinson.

Cole currently plays on Nick’s U18 team who were regular season Champions with a 7 – 1 record and a finalist at MARS Premiere Tournament! He is 16 and a rising Junior at Providence. 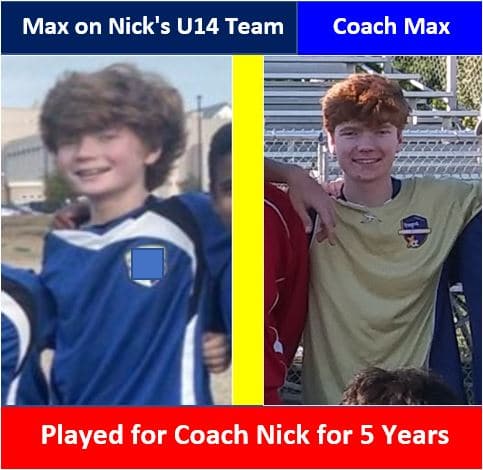 Max coaches one of Hope Soccer’s U10 teams alongside Coach Juan.

Cool Moment: In the U14 premiere Tourney, vs. the Simmons Y, the team we played against in the final the year before. Coach Nick put Max up top instead of his typical defensive position. In a few mins he ran on to a through-ball, took on the defender, and buried the ball in the bottom corner, tying the game 1-1. We won that game 3-2, but got eliminated on goal differential.

Max played for his middle school team at Crestdale Middle.  He currently plays on Nick’s U18 team! He is currently 16 and a rising Junior at Providence High. 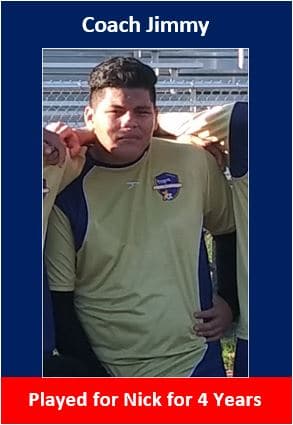 Jimmy is an Assistant Coach to the U8 team.

Cool Moment: The day we all refer to as “Jimmy’s Day”, Sweet Girl wasn’t at the game to take video of his Hat Trick of beautiful goals.  One was a laser outside the box that nearly rocked the net as he hit it perfectly in the upper 90s!  He scored 2 more beautiful goals that game!  The boys on the team still tease him that it never happened, since there is no video.  As consolation prize, we have video of Jimmy taking a nice shot from pretty far out that hit the crossbar. We’ll get you on video next season, brotha!

Jimmy is currently on Nick’s U18 team.  He is 17 and a rising Junior at South Meck. 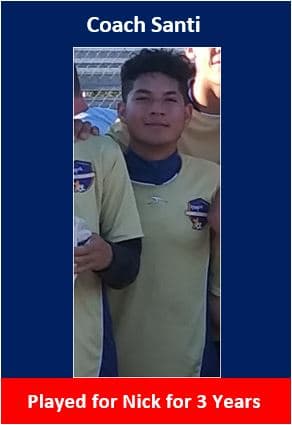 Santi coaches the U6 team alongside Coach Franco.  Santi’s cousin, Emiliano, who is 5 years old is one of the star players on Santi’s team!

Cool Moment: In a U18 game, against a tough team, Santi knew he would be coming in at a new position, for an injured player at Left Mid.  He was nervous about playing LM since he was more used to an attacking role.  He showed a lot of maturity by calling the injured player and asking him questions about the LM position.  He went against his natural instinct as a forward, and played a lot of tough, physical defense.  He also created a lot of opportunities in the attacking third. He scored no goals that game, but it was one of his best games ever.  He played a full 90mins of disciplined soccer.  To top it off with some humor, later that night, as we were watching Queens Soccer play (link), he went to the injured player’s dad and bragged that he’s now the new starting LM.  Gotta love it!

Santi played on his middle school team at Quail Hollow.  He is currently 15 and a rising Sophmore at South Meck. 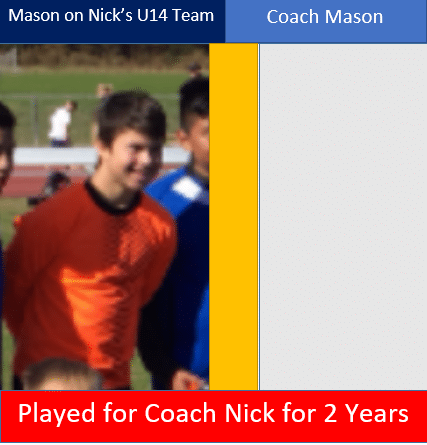 Mason coaches one of Hope Soccer’s U10 Teams alongside Coach Cole.

Cool Moment: In the U14 tourney, we were grouped with 2 of the best teams because of our strong record.  The first game was against a CLT Jrs team that hadn’t lost all year, until we beat them 2 – 1.  Mason had a busy day and made several incredible saves to keep us in the game.  It just so happens that the picture of Mason as a U14 player is from that day!

Mason currently plays on Nick’s U18 team.  He is 18 and a rising senior at Carmel Christian. 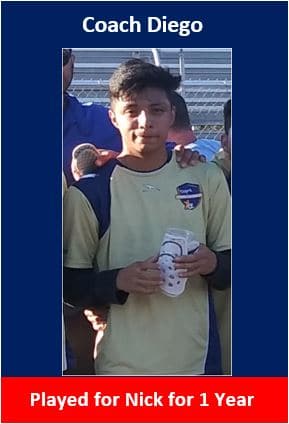 Diego coaches the U12 team alongside Coach Keanu.

Cool Moment:  Diego often has the role to play one of 2 Center Mids.  As such, he is often up against the other team’s best attacking/creative players.  These players are often the most technical players, making them hard to track and defend.  One particular game in the U18s, there was a particularly strong CM that Diego had to mark.  As the boys get older, things get more physical.  Competitive players drive up the physicality even further.  I told Diego at half time, that in order to shut down their whole team offensively, he had to shut down this particular player, #15.  Without so much as a yellow card, or even a foul, #15 spent a lot of time on his butt coming up with creative excuses for why things weren’t going his way.  We won the game, and Diego understood what it means to fight for every inch on the pitch that day!

Diego is currently on Nick’s U18 team.  He is 16 and a rising Junior at South Meck. 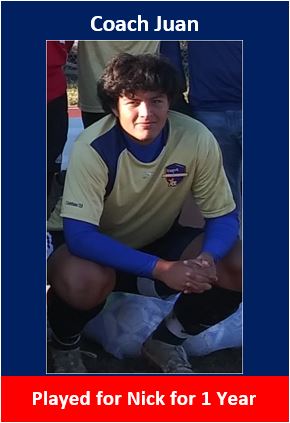 Coach Juan coaches one of the U10 teams alngside Coach Max.

Cool Moment:  Juan plays one of 2 Center Backs.  Sometimes Nick will risk it, and throw in some of his defenders, including the other CB and the LB inside the box during a corner because they’re good in the air.  That is a risky strategy that often times leaves Juan almost alone in the back to protect against a counter.  In a tight game against a certain YMCA team (wearing purple) Juan got stuck in for the ball at a crucial moment to stop their counter attack and keep us in the game – which was heavily contested.  Altogether he is simply solid at the back and talented enough to where he can quickly create a counter attack for us out of the back. It works out perfectly!

Juan is currently on Nick’s U18 team.  He is 16 and a rising Junior at South Meck. 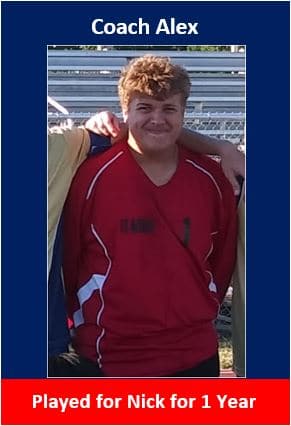 Coach Alex is an Assistant Coach to the U8 team. He is also the goalkeeper coach for the U10, U12, and U14s.

Cool Moment:  In an intense game, in the playoffs, against a CSA team which had an impressive record, Alex came up with a big save in the first half to keep the other team at bay.  The remainder of the half went back and forth, before we were able to break down their defense and end up winning the game decisevely.  However, a decisive win could look a lot different if the other team goes up 1 – 0 early on.  The menatl game changes and the entire game could be totatlly different.  That is why an important save in the beginning of the game can be crucial!  Alex is a talented keeper and he has kept our team “in the game” on several occasions!

Alex is currently on Nick’s U18 team. 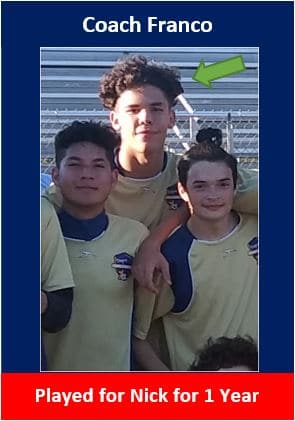 Coach Franco coaches the U6 team alongside Coach Santi.

Cool Moment: Franco is a talented forward and good defenders pick him out in the game early on because they know he is a threat. Against a pretty good CLT Jrs team, one that had a history of beating us as U14s, Franco took on their CB, megged him, and passed the ball to Santi who put in the back of the net.  We won the game 4 – 2 contributing to our 7 – 1 record in our first season as Hope Soccer!  Franco was happy to hear that we got it on video that you can watch here!

Franco is currently on Nick’s U18 team.  He is 17 and a rising Senior at South Meck. 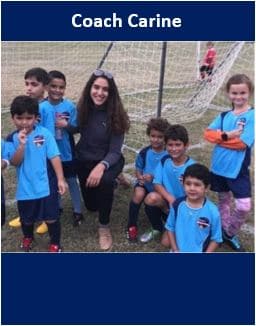 Carine has never played for Coach Nick, as he’s never coached a girls’ team, but she is Coach Freddy’s Sister and so she’s kicked around with the boys over the years, and she is a very talened soccer player.

Her and Coach “Sweet Girl” make an awesome team, full of energy, love, support, encouragement for what we affectionaltely call Hope Soccer’s “littles”.  But “little” or not, they won several games in their first ever season – thanks in part to their awesome duo of coaches of course!

Carine has now graduated high school and is deciding which college to attend.  Last we heard it was between Queens University and NC State. 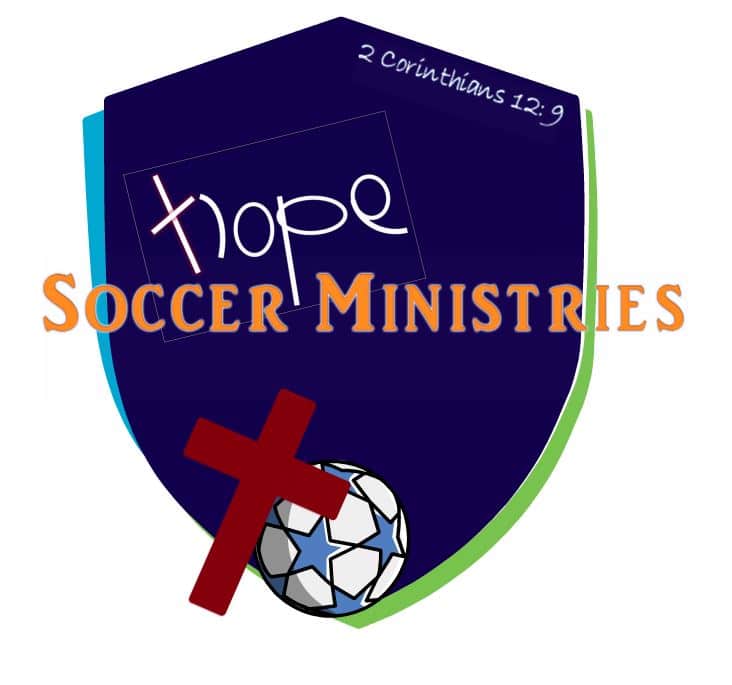